While the SUV-coupe class was not new when the Arkana was introduced on the Russian market in 2019, there was no mass-production car-maker in the segment.
Renault was the first to try.

Due to the Renault-Nissan alliance, the French manufacturer was able to start building an entire lineup of cross-overs and SUVs. Most of them were front-wheel-drive since the West-European market was dominated by FWD cross-overs and SUVs. On the other hand, Russia was a different market. There, the poor quality roads and harsh winters demanded a 4x4 vehicle.

The SUV-coupe featured an aggressive front fascia, with lines that resembled the Talisman limousine or the Megane compact vehicle. The raked A-pillars don’t look like those from other cars in the Renault lineup. The sloped end and the small greenhouse enhanced the coupe-look of the car.

Inside, there was a mix of different Renault models, starting with the center stack that looked like the one on the Dacia Duster, and an instrument cluster that featured classic dials.

The Arkana was based on the Dacia Duster platform available with front or all-wheel-drive systems and it was built at Avtoframos, the Renault factory outside Moscow. It was fitted with a choice of two engines. A 1.3-liter and a 1.6-liter, respectively, which were mated to a standard manual transmission. As an option, a CVT or a 7-speed DCT (dual-clutch) was available. 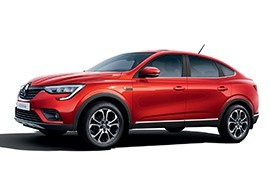