After 15 million units sold, the Clio was one of the most successful cars in Renault’s history.
The fifth-generation had a difficult job to do: to keep that name on top of the sales charts.

Built on the legacy left by the Renault 5, the Clio was a car addressed especially for urban mobility, but it didn’t have any problems in running long distances. It stood up proud in the small hot-hatch segment with the Clio Renault Sport that challenged the MINI Cooper S territory. The Clio was the best selling French car of all times and it was received the European “Car of the year” award twice!

The fifth generation of the Clio was introduced at the 2019 Geneva Motor Show. It was shorter than its predecessor, lower and wider. It made it look sportier with the Megane-inspired front fascia. The Clio was offered with LED headlights, which was not that common in the small-segment.

The new, CMF-B (Common Module Family -B) used for it helped the car in interior space and safety features. Inside, the Clio was highly upgraded when compared with the fourth generation. On the center stack, a standard 4.7” infotainment display was installed, and a 7” was offered for intermediate trim levels. There was a 9.5” screen on the options list. Fortunately, the designers left the rotary knobs for volume and climate control underneath.

The Clio was offered with a choice of three engines of 1.0-liter with three power levels and a 1.5-liter turbodiesel offered in two power choices. A hybrid version was the big novelty for the range. 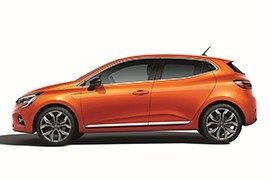