For those who were looking for a balanced car between cost, performance, utility, and comfort features, Renault introduced the Clio GT in 2013.
The fourth generation of the Clio was launched in 2012 at the Paris Motor Show. Unlike its predecessors, it was available as a 5-door only version, either as a hatchback or a station-wagon. On the hatchback version, the Clio GT was the mix of everything. It offered decent power, a lot of features and decent space for five passengers on short distances, or five passengers for long trips.

The GT Line featured different front apron with LED daytime running lights in the lower side. A big grille in the center and smaller side fake-intakes made the car look more aggressive. In the back, the twin-round exhaust was placed next to a diffuser. A roof-spoiler with the third brake-light finished the sporty look of the exterior.

Inside, the Clio GT featured bucket-seats in the front and a bench in the rear. On the center stack, there was a standard infotainment unit, which supported Android Auto and Apple CarPlay, but an option for a better system named R-Link was available and it could show live traffic.

For the engine, the GT-Line was offered with a 1.2-liter turbocharged gasoline unit. It was mated as standard to a six-speed dual-clutch automatic gearbox. It was good to offer an under 10 seconds sprint from 0 to 60 mph (0-97 kph). 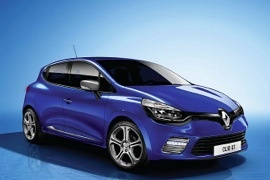