The awaited mid-life cycle refresh for the compact SUV Renault Kadjar arrived in 2019.
Underneath the fluid lines of the bodywork was the same platform CMF shared with the Nissan Qashqai, but somehow different. Their technical alliance allowed some swaps for engines and transmissions. It offered an alternative for the Japanese cousin, with a different approach.

Outside, the big chromed Renault Logo stood proud on the grille and the headlights. The C-signature for the DRL. The headlights and taillights gained LEDs instead of halogen lamps, but not for all the trims. Some of them were still kept in the halogen era to offer cheaper versions.

Inside, the instrument cluster is full TFT, with elements taken from the Megane. A trained eye could notice some other buttons and switches from the compact Renault. A good gain is the R-Link 2 infotainment system that can cope with the Android Auto and Apple CarPlay.

Since more than 70% of the European SUV market was for the 2WD transmission system, only a few versions of the Kadjar were offered with a 4WD system. There was a wide range of engines and transmissions, with a 6-speed manual offered as standard. CVT and 7-speed dual-clutch automatic transmissions were available as an option. For cost-cutting reasons, all the Kadjar versions, regardless of traction, had semi-independent rear suspension. 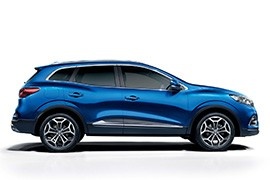