The Renault Megane RS was a total surprise when it came to the market and hit the hot-hatch segment with a car that could deliver more performance than the iconic VW Golf GTI.
The third generation of the Renault Megane RS came in 5-door version and that was a good thing. While it didn’t have the sporty look of a three-door hatchback, it had more practicality. It was based on the mass-volume car Renault Megane and shared the same suspension with that. But a Cup chassis was available as an option and that offered stiffer suspension and a limited-slip differential

From the outside, it was easy to identify a Megane as an RS version due to its checker-flag like fog-lights in the front bumper. The front fenders featured flared wheel-arches and side scoops to extract the air from the wheel-well. The rear bumper was specific for the RS. It featured a trapezoidal middle exhaust and a diffuser underneath. On top of the tailgate, there was a roof-spoiler to enhance the aerodynamic.

Inside, the RS had Alcantara everywhere: on the dashboard, on the bucket-type seats, and on the door panels. Of course, those were offered as an option. Also, an option was the large, portrait type, infotainment touch-screen display. The standard unit was a 7” in a landscape mode.

For the powertrain, there were two options: either a 280 hp version or a more aggressive 300 hp. Both were available with either a 6-speed manual or a 6-speed automatic dual-clutch with paddle shifters behind the steering wheel. For better handling, it featured a four-wheel steering as standard. 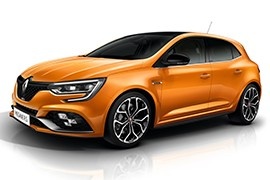