We can probably all agree that the Twingo was not the most stylish small car out there.
Along the years, the Renault Twingo was mostly sold for its modularity. The sliding rear bench was very practical and the Twingo had built reputation on interior space.

For 2007, Renault decided to bring a sportier version of the regular Twingo, the Twingo GT.

The new model didn’t sport the already known roundness of its predecessor and used the styling from the then-new Modus and Clio.

The Twingo GT was better equipped and more solid and it was the Renault’s first attempt at building a sporty version of the regular vehicle.

With the GT version, the exterior design featured its own specific front bodywork, chrome tail pipes, 15-inch alloys, a roof spoiler and sating grey side mirrors.

While the overall look wasn’t all that attractive, the front was more appealing than the rear end.

The Twingo GT was available with a new 1.5-liter DCi unit or a 1.2-liter powerplant with 100 hp. Renault stated that the small 1.2-liter unit offered the torque of a bigger 1.6-liter one.

Inside, the materials’ quality was greatly improved and the everything looked well put together.

Even the driving position was optimised to make the driver feel safer while driving more aggressively. 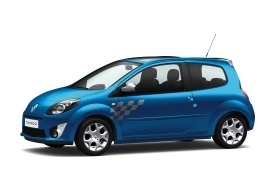