The French concept of the Twizy was shown in 2009 at the Frankfurt Motor Show, a very small electrical vehicle designed for urban transportation.
It didn’t take long until Renault decided to start producing the Twizy in 2012.

The tiny vehicle was rather a more comfortable alternative to scooters than a real car. It could accommodate up to 2 people sitting one behind another, just like in a motorcycle.

The Twizy did not have windows or air-conditioning, thus making it a bit unpractical during rainy or very hot days.

The Twizy could do around 100 km on a single charge, however, Renault stated that if drive aggressively, the 100 km range would drop to around 55 km. The battery would charge at maximum in around 3,5 hours.

While offering lots of space in the front, the Twizy did not have much storage room. 2 gloveboxes were available and a tiny storage compartment in the back, where users could fit a purse.

While a great alternative, the Twizy did not offer a car-like performance. It was easy to park due to its reduced dimensions, as well as very manoeuvrable.

Safety was not forgotten, the Twizy being equipped with a driver airbag.

Great for driving around town, the small car offered great agility and did well on turns. The suspension was a little stiff, thus the Twizy did not offer a very smooth ride. 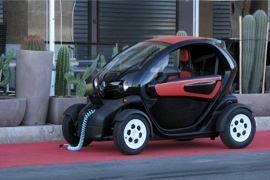