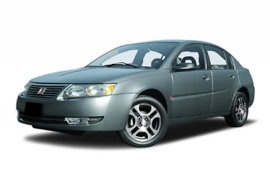 General Motors introduced the Saturn brand as an intriguing experiment that failed due to the world financial crisis but lived enough to leave some marks in automotive history.
Built on the same platform as the Chevrolet HHR or the Vauxhall/Opel Astra, the Ion was more than just an experimental vehicle. It was a compact sedan designed with outside-the-box thinking, which led to unusual solutions.

The three-box sedan shape with a cab-rearward design made a difference in its segment. It wasn’t that bland-looking econobox on wheels that blocked the left lanes. At the front, its wide headlights and the five-slats grille that supported the red Saturn badge made a difference. Its raked windshield and arched greenhouse were not a common sight in the automotive design trends, while the short, flat, deck-lid with a tilt-forward rear panel completed the image of the unusual compact vehicle.

Inside, GM tried again convincing its customers that the center-mounted instrument cluster is better for the driver, but customers didn’t like that. Even the steering wheel was less common with its round shapes for the buttons. The center stack looked more conventional, in a curved V-shape, where the carmaker installed the audio and climate controls. GM’s addressed the car to the young generation and priced it low. That led to lower-budget materials inside the cabin. Still, it was better than other cars in the same price range.

Under the hood, GM installed a choice of two, four-pot engines. Saturn shared these with other brands from the big carmaker stable. It paired them to either a five-speed manual or a four- or five-speed automatic.