At the 2009 Geneva Motor Show, the Spanish car-maker SEAT introduced a facelifted version for its Altea MPV.
But the minivan revolution was over and the car sales dropped.

The SEAT Altea was introduced in 2004 and it was an MPV based on the same platform with its sibling, the SEAT Leon. Its front styling resembled its brother’s front-end, with curved headlights and angular corners. It was a tall car and built for families who enjoyed long journeys. The practicality and the comfort offered by the Altea were its main attributes, along with a fuel-efficient engine range.

The 2009 Altea design was better, with a bigger grille and cornering lights function for the fog-lights. On its sides, the sculptured doors induced a dynamic view of the car, even though it wasn’t that sporty. In the back, the big tailgate opened the access to a big trunk space of 409 liters (14.4 cu-ft), which could have been extended to up to 1481 liters (52.3 cu-ft) with the rear seats folded

Inside, the car featured more storage compartments in the doors, center console, and center stack. The dashboard was curved and tall, with an instrument cluster that featured three individual dials. There were two grab-handles at the base of the center stack that looked unusual for an MPV. The high driving position left big space behind the front seats, leading to loads of legroom and, due to the high roof, the headroom was not a problem even for tall people. 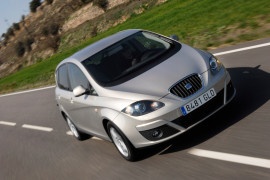