In a somewhat odd turn of events, the final generations of smarts made exclusively under the Daimler/Mercedes-Benz will feature electric power exclusively.
Initially it was offered just as an option, but the EQ version of the smart forfour is now the only version left after Geely bought 50 percent of smart GmbH from Daimler. The next generations of the model will also be offered exclusively with emission-free electric powertrains and will be developed in Germany but manufactured mostly in China for the worldwide market.

The switch from gasoline and even diesel engines to an entirely battery powered model lineup during the course of a single model generation doesn’t come easily, but the forfour is identical in this area with the smaller two-door fortwo. Both cars were developed from the beginning to support electric powertrain. The EQ forfour’s electric motor is good for 82 horsepower and a healthy 160 Nm of instant torque, just like its smaller brethren. Both use a separately excited synchronous motor fitted in the rear, underneath the luggage compartment, just like on the ICE-powered versions, which is fed electricity from a Li-ion battery with a capacity of 17.6 kWh. The 96 HV cells in the battery give the car a maximum range of 159 kilometers (99 miles) according to NEDC standards, which is most of the time enough for a day’s worth of running all kinds of errands throughout a city and plugging the car to recharge at night. 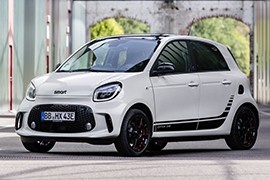