Spyker introduced the Spyder on the same platform as its sibling, the C8 Coupe.
It preserved the unique door opening system that impressed.

Revived in 2000, the Spyker was introduced on the supercars market with a unique styling and a heroic story behind it. The brand name came from an airplane maker that closed its doors in 1925, and it had an automotive section as well. Maarten de Bruijn and Victor Muller established the Spyker Cars in 1999 and launched the C8 Coupe with that history behind it. In the following year, they introduced the roadster version: the C8 Spyder.

The Audi-powered supercar featured an unusual look for its headlights. They incorporated four lamps under clear glass. A mesh-grille helped to cool the engine while an extracting vent released the warm air over the raked A-pillars. With its rounded shapes all around and the short cabin, it looked like an oversized MG TF Roadster. Even the engine was in the middle, and that forced the carmaker to install additional air-intakes on top of the rear quarter-panels and on the sides.

Inside, everything was covered with leather and aluminum, apart from the buttons and switches. It was clearly a car built for those who had a taste for luxury. The aluminum dash panel featured a line of gauges placed in the middle while the speedometer and tachometer took the area in front of the driver’s seat.

The engine compartment was in the middle and Spyker cut a deal with Audi to provide them the 4.2-liter V-8 engine used by the German carmaker on several cars. Thanks to its twin-turbo feed, the powerplant produced 525 hp. 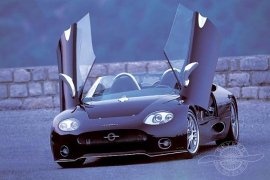