The Exiga was the car that Subaru built as a true alternative for minivans but never sold it in the U.S. or Europe, but they sold it in Australia as the Liberty Exiga.

Subaru built a few kei-cars minivans for its home market and the Impreza and the Legacy for the rest of the world. Thus, the carmaker was experienced in both areas. when it combined those skills, the result was named Exiga from “Exciting” and “Active.” It was a minivan that looked more like a taller station wagon.

While Subaru never excelled in car design, except when it worked with Giorgetto Giugiaro and made the SVX. That’s why when it managed to create a relatively successful vehicle, such as the Impreza and the Legacy, it took the same design ideas and translated them into different sizes. The Exiga (Liberty Exiga) featured a front fascia that looked similar to the one installed on the Legacy. Its front bumper sported a lower apron and a grille which gave the car an aggressive look. From its profile, the tall greenhouse and its three wide side windows resembled an MPV, and the flat vertical tailgate confirmed that it was more of a station wagon than a minivan.

Inside, the carmaker installed three rows of seats, with the last one placed higher than the front seats. Apart from the front seats, all the others were split-folding, which allowed the owner to transport a surfboard. The minimalist design lines of the dashboard provided a large display on top of the center stack and three dials inside the instrument panel. A center console divided the front seats and sported the gear-selector for the gearbox (manual, CVT, or automatic).

Under the hood, the carmaker offered the Exiga a choice o three engines paired with either a five-speed manual or only with an automatic gearbox as well. 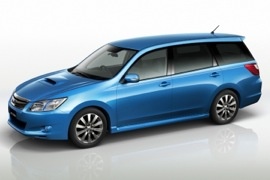