Subaru unveiled the fifth generation of the Impreza at the New York Auto Show in 2016, and it made the car available as a sedan or hatchback right from the start.
The fourth generation of the Impreza was on the market for only five years before Subaru replaced it. It was unusual for a carmaker to make that fast changes. Worth mentioning that the 2011 Impreza was facelifted in 2014, and it didn’t look outdated two years later. But the Japanese carmaker had other ideas.

The sedan version shared the front fascia with its hatchback brother. With its streamlined, swept-back headlights and a black-mesh grille at the front, the 2016 Impreza showed a clear statement for other sporty sedans from the market. The turbocharged versions featured a hood-scoop to show its muscles, especially for the WRX and WRX STI versions. Since it was a three-box sedan, it was longer than its hatchback sibling but featured the same wheelbase.

Inside, Subaru installed sport bucket seats at the front with high bolstering. The dashboard showed greater attention to detail paid by Subaru’s designers and an infotainment unit on top of the center stack. Above that, the carmaker installed an additional screen for the onboard computer for selected models. But all Imprezzas received a center console with a center storage compartment under the front armrest. In the back, Subaru installed a 60/40 split-folding bench for three. Its separate trunk was good for 348 liters (12.3 cu-ft), which was kind of small when compared to the rest of its competitors.

Under the hood, Subaru installed only one engine for the regular sedan version. The other options were the WRX. 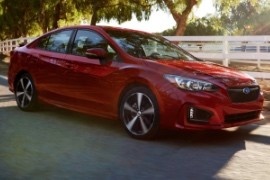