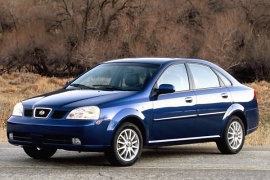 After GM bought Daewoo’s remains, it tried to recover some money from the vehicles already developed by the Korean carmaker.
The Suzuki Forenza was one good example of that.

The Japanese brand cut a deal with GM to offer some of Korea’s vehicles under a Suzuki badge. General Motors considered that an opportunity and jumped in. In the end, both the Forenza and the Lacetti ended up with a similar price tag. But while the Lacetti was sold in Europe and Australasia, the Forenza was available in the U.S. The sedan version of the Forenza was signed by Pininfarina.

The Forenza offered enough interior room for five adults, but it’s not exactly comfortable. For in-car entertainment, Suzuki offered a classical radio-cassette player but has also added a 5-CD changer for the upper trim levels. Air conditioning was offered as a standard feature for the vehicle. The base model had manual rear windows for some countries, but upper trim levels come with power windows and locks and alloy-wheels.

The Suzuki Forenza was available on some markets as Chevrolet, Buick or even Holden, since all these brands are under the General Motor umbrella.

Suzuki impressed with its high-strength steel, dual front airbags, and an additional two side airbags for the 1.6-liter engine from the safety point of view.