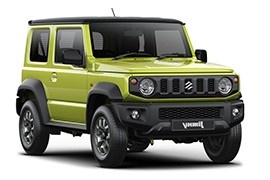 It is very difficult for a carmaker to continue a legendary car for decades.
Somehow, Suzuki managed to keep the Jimny nameplate since 1970 and still be appealing. But in some parts of the world, it is known only as of the second generation.

At a glance, some would say that the Suzuki designers are paid on a minimum wage. But since its image is very easy to remember, it means that they did good work. The boxy look is amplified by the small size of the vehicle. It is not the same mean look of a G-Class but in a more friendly way. Small hood, round headlights and straight-up windshield are easy to remember.

From the technical point of view, its ladder chassis is the backbone of the vehicle. The 3-link axles feature coil springs. To stiffen the ladder, Suzuki installed more X-cross members. It is true, that the comfort ride was never a Jimny asset. But nobody cared. The customers cared more about the 37 degree approach angle, the 28 degree ramp breakover angle and the rear 49 degree departure angle. These are important assets in off-roading. And the new, LSD rear differential is a great feature when the terrain got slippery.

The true off-road Jimny features a part-time 4WD system and a low-range transfer case. As for the engine, it is still small. But the light, 1135 kg (2502 lbs) vehicle doesn’t need more than 101 hp from the 1.5-liter gasoline engine. 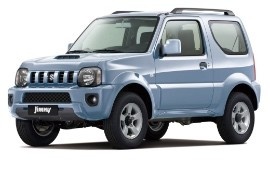 In 2012, the conservative Jimny received a slight refresh.
Nothing too flamboyant but it had to be done in order to keep the car compliant with modern safety regulations.

The exterior is quite the same, with the exception of a redesigned front bumper, a decorative hood scoop, new rims and a few extra colors, including Breeze Blue Metallic.

On the inside, some slight design changes have been applied, the headrests have been remodeled for increased safety, the seats upholstery follow a tire pattern and in 2014, the automaker also added a gear shift indicator, electronic stability control and tire pressure monitoring. 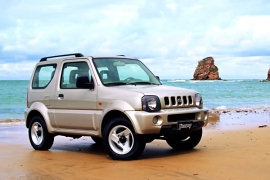 Suzuki refreshed the Jimny range in 2005, seven years after the new model’s initial introduction, which replaced the older and trustworthy Samurai range.
The Jimny was the smallest rough off-roader on the market. It was the only car of its size that sported a body-on-frame construction with rigid axles both front and rear. Even though the carmaker built it with coil-springs, it wasn’t a comfortable partner on the road but a serious contender on a trail. By 2005, Suzuki had to refresh the car to comply with the Euro 4 emission regulations.

Suzuki showed the world that a boxy-looking vehicle doesn’t necessarily mean an ugly car. Despite its flat panels, very appreciated for off-road, the Jimny looked balanced. It was built in a closed or open-top version. For the hard-top version, the car featured unusual-shaped rear side windows. The side-hinged door sported the spare wheel at the back since there was not enough room inside the car to keep it.

Suzuki tried to offer as much comfort as possible for a vehicle light with front and rear live-axles for the interior. There were two bucket seats and a plastic dashboard, which could have been washed with a garden hose. There was a bench for two in the back, but those two had to be very good friends since the car was very narrow. As for the trunk, it was large enough for a two-people tent and two sleeping bags.

Under the hood, Suzuki installed a new 1.3-liter engine with variable valve-timing that provided five more ponies than the non-facelifted version. A 1.5-liter turbo-diesel was also an option. Both of them were paired to a 5-speed manual, and there was no automatic option. 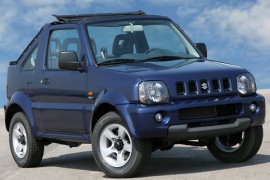 It didn’t matter the size.
The Suzuki Jimny was a real off-road vehicle able to go where any other Jeep, Toyota, or Landie could go and, sometimes, outrun them, no matter how slow it went.

In 1997, Suzuki decided to retire the Samurai off-road vehicle. It was on the market since 1970 and even with all of its improvements began to show its age. Suzuki changed almost everything when it built the first generation of the Jimny and improved it even further in 2005. The car still had to comply with the new, for Europe, Euro4 pollution norms.

Suzuki showed the world that a boxy-looking vehicle doesn’t necessarily mean an ugly car. Despite its flat panels, very appreciated for off-road, the Jimny looked balanced. It was built in a closed or open-top version. The latter featured a safety bar behind the front seats, even though the car was built on a ladder-chassis, and it didn’t need one unless it turned upside down. And that happened many times in hard off-road. In the back, the open-top version featured a side-hinged tailgate with the spare-wheel on it.

Suzuki tried to offer as much comfort as possible for a vehicle light with front and rear live-axles for the interior. There were two bucket seats and a plastic dashboard, which could have been washed with a garden hose. There was a bench for two in the back. It hardly provided any room for anyone taller than a tiny toddler. As for the trunk, well, there was barely room for a six-pack and a one-person tent.

Under the hood, Suzuki installed two engine choices: 1.3-liter gasoline and a 1.5-liter turbodiesel. Both of them were paired to a 5-speed manual, and there was no other option.