Suzuki unveiled the third generation of the S-Cross crossover in late 2021 and, due to the pandemic situation, it had to do that in an online event.
The car was not completely new, though, since it shared its platform with its predecessor. But that was not a bad thing at all since the S-Cross’ second generation was an appreciated vehicle. Both were built at Suzuki’s plant from Hungary and exported in Europe and a few other countries around the world.

But Suzuki did make a new bodywork with a strong appearance. At the front, the tall grille flanked by three LED position lamps created an SUV stance. Even though it kept the rounded edges and raised beltline towards the back of the car, it didn’t have the same hatchback look as its predecessor. After all, Suzuki was known for its off-road abilities, especially with the Jimny and Vitara models. At the back, the clear taillights were out of fashion for other carmakers, but Suzuki gave them a second chance and installed them on the S-Cross.

Inside, the car received more standard options, even for the base trim level. It still kept the analog dials, despite the market’s general trend towards TFT displays in the instrument cluster. Above the center stack, in a floating position, the carmaker placed a 7” touch-screen for the infotainment system, with Apple CarPlay and Android Auto connectivity. Even though it was more of a budget vehicle, it still provided a panoramic sunroof as an option.

Under the hood, Suzuki placed its bets on a 1.4-liter turbocharged engine. A 48-volt mild-hybrid architecture was also available. For the transmission, the S-Cross relied on the same Haledx-based all-wheel-drive system controlled via a rotary knob placed on the center console. 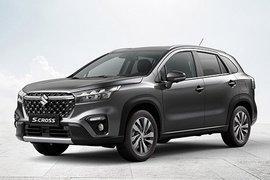