The Tata Indigo reached its second generation in 2009, after various updates for its first generation.
It was unveiled in October 2009 and it wasn’t based on the same platform as its predecessor.

When India needed a cheap car, with low running costs and reliable, the Tata Industry launched the Indica. It was designed and built mainly for the Indian market, but it was also exported in other countries and in Europe. The simple design of the first generation was updated for the 2009 model, Indigo Manza.

Since it was based on the same platform as the Indica Vista and it shared both the name and the platform, the Manza featured the same headlight design and some of the parts until the B-pillar. But, since the Manza was basically the three-box version of the Vista, it had a different C-pillar and ending. Depending on the trim level, the Indica Manza featured alloy-wheels.

Inside, the Manza was offered in various trim levels. Even for the base trim level, the Indica Manza Aqua was equipped with a 2Din audio system. On the upper versions, named Aura, Aura (ABS) and Aura +, the car featured more amenities, including leather seats, airbag and air-conditioning.

Tata Indica Manza was a joint development with Fiat, who provided the 1.4-liter gasoline engine and the 1.3-liter turbocharged diesel unit. Both were mated to a standard 5-speed manual. 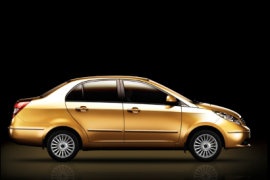