After the successful Model S electric sedan, the Model X came on the market as the first SUV from Tesla Motors.
At the time of its launch, it was the quickest SUV on the market.

The electric shock of the electric cars built by Tesla gathered more attention with the electric SUV. It was a true statement for electric mobility. Unlike many other cars on the market, it was built to carry up to seven people inside on medium-long journey in comfort and serenity.

Tesla Model X was the most aerodynamic SUV in the world with a drag coefficient of just 0.25. There were many sports cars that couldn’t match that number. Its sharp short front fascia and curved appearance. A small gap under the front lid stretched between the headlights. The front doors were front hinged, like a regular car, while the rear were up-hinged and opened upside, like a seagull wing. As a Star-Wars fan, Elon Musk, the owner of Tesla Motors, named these doors as “Falcon-Doors”, from the “Millenium Falcon” star-ship.

Inside, the Model X offered true seating for up to seven adult passengers. While the fits and finishes were not quite as good as in a premium car, it featured a completely new approach for the driver experience. The instrument panel was a TFT display and the center stack was occupied by a huge, 17” touch-screen display, which integrated all the controls for the climate control, infotainment unit and car settings. 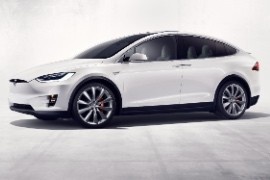