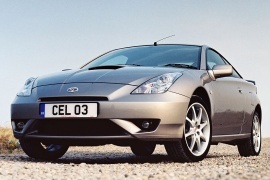 The 2002 version of Toyota Celica is the last edition of this popular model which was first manufactured by the Japanese company in 1970.
The new model had a couple of improvements from the previous versions, no matter if we’re talking about engines, safety features or other upgrades. For example, since 2000, the seat-mounded side airbags are options for all Celica models while dual SRS airbags have been used since 1994. In 2005, Toyota announced that Celica will no longer be available in North America and Australia, the domestic market being the only one which would get upgrades in the future. 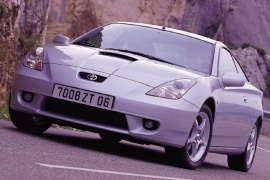 The coupes were in general the most stylish cars on the market.
Besides the good looks, they usually came with great performance.

With the Celica history beginning back in the 70’s, the sports coupe reached its 7th generation in 2000. The new model was the best looking version in years and was inspired by the American muscle cars.

The new Celic had bold lines and an extended wheelbase that allowed a better corner approach, while being shorter than the previous model.

The interior of the Celica was comfortable and had a good level of equipment, but it was not the most stylish interior on the market. It was overloaded with plastics and lots of different lines.

While the sports tourer offered great space for the from passengers, the seats in the rear could only accommodate small children.

The Celica had a sports handling and offered a comfortable smooth ride.

Both engines were refined and were quicker than before, being mated with a 6-speed gearbox.

The Celica offered great value for money with a package of great looks and performance altogether. 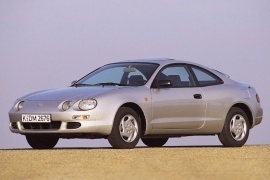 It was one of the best sport-compact coupe vehicles from its era, with huge success due to its World Rally Championship titles.
The street version though was a different story.

The Toyota Celica was offered with three bodywork styles: hatchback-coupe, three-box coupe, and convertible. The hatchback-coupe version was the base model for the rally-car, with a turbocharged engine and all-wheel-drive. The Europeans received it, but they didn’t get it with the convertible and the three-box coupe version. The U.S. version was available with all three bodyworks.

When compared with its predecessor, which featured pop-up headlights, the 1994 Celica featured four rounded headlights and no grille. The engine was cooled via the front-integrated wide grille. The side fluid lines were typical for the biodesign era when the car was designed.

Inside, there were four seats installed, but the rear room was very limited. The interior featured a driver-oriented dashboard and high-bolstered front seats. The car was fitted with dual airbags for the front occupants, but the ABS was optional for the base model. The air-conditioning was fitted as standard on the GT trim levels.

The base engine was increased over its predecessor from a 1.6-liter to a 1.8-liter, while the top version was the 2.2-liter unit. In Europe, a 2.0-liter naturally aspirated and a 2.0-liter turbocharged was offered, the later being mated to an all-wheel-drive system. The U.S. models were stripped of that and the Celica was offered with front-wheel-drive only. A wider track and a stiffer suspension over its predecessor made the 1994 Celica better on the corners. 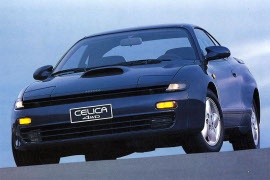 The 1990 Toyota Celica will remain in history as one of the most successful rally-cars ever made, with over 30 WRC wins and world titles for the team or its drivers.
In the mid-’90s, Toyota struggled to beat the other carmakers in the World Rally Championship, but the Lancia and Ford teams were faster. The Japanese carmaker knew that without an all-wheel-drive version will lose the game, and then, in 1989, it introduced the Celica lineup with the GT4 as the most potent version. Then, everything changed, and it became the car to beat.

The 1990 Celica switched from its predecessor’s angled design to the rounded shapes of the biodesign era. Its pop-up headlights were still en-vogue, and the curved, short cabin was designed to minimize drag resistance. Toyota offered the car either as a hatchback or as a coupe. The GT4 was available only as a hatchback and sported an air-intake and a few extra vents on the hood.

Inside, the carmaker installed four seats, but there was very limited room in the back, even for a toddler. In many countries, a 2-seat car was taxed more than if it had four. Toyota installed a rounded instrument cluster with the minimum information required. Only the GT4 version featured an oil temperature gauge.

Toyota offered the Celica with a choice of engines ranged between 103 hp and 200 hp. Only the latter was fitted with an all-wheel-drive system.