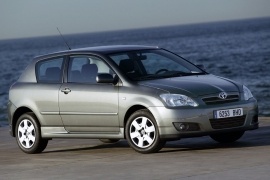 The Corolla reached its ninth generation in 2000.
In 2004, the car-maker introduced the 3-door hatchback version for the European market with a sporty look.

With the new model on the market, the Corolla 3-door had to fight against the best of the compact class vehicles in Europe, such as the VW Golf, Renault Megane, Opel/Vauxhall Astra, and Ford Focus. Another important contender on the market also was the Honda Civic 3-door. In 2004, Toyota had to do a facelift to improve the compact Corolla, which was lower on the sales by all of the above.

Since there was little to do with the exterior look, the Corolla 3-door was improved in the technical department. The new smoked headlights and a reshaped bumper aimed for a sportier look. But the rest of the greenhouse, with more upright windshield than the other contenders, didn’t help.

Inside, the Corolla was fitted with an option for sportier-look seats, but without big bolstering on the side to help while fast cornering. The simple layout of the dashboard was not as bold as those offered by the other competitors. Toyota’s design philosophy was not so appealing for European customers.

In the technical department, the Corolla 3-doors offered economy engines of 1.4-liter diesel and went up to a 1.8-liter unit that offered 192 hp for the European version. In other markets, it was available with a supercharger that boosted the power output up to 225 hp. That was not available in Europe. 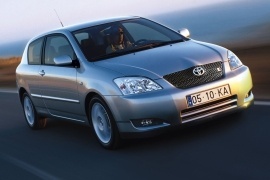 Since its introduction on the market in 1968, the Toyota Corolla suffered many mechanical and exterior design changes.
Offered in different body styles such as a hatchback, a coupe, a wagon and a sedan, the Corolla enjoyed great success mostly due to its reliability.

With many competitors in the segment, Toyota decided to reveal a more modern Corolla to compete with the Ford Focus, the Honda Civic and the Hyundai Elantra.

Under the hood, the Corolla was fitted with a punchy and smooth-revving 1.8-liter 4 cylinder unit that developed 125 hp. The powerplant was mated with a manual transmission, but an optional automatic 3-speed or 4-speed gearbox was available.

The 2002 model was available in three trim levels: the base CE, LE and the Sporty S.

Toyota was criticized for the lack of air-conditioning and power windows as standard features.

With the Sporty S trim level, the Corolla included body-colored rocker panels and door handles, fog lights, a fake leather-wrapped steering wheel and a tachometer with outside temperature display.

One of the biggest drawbacks was represented by the cramped interior, for both front and rear passengers.

With the rather bland exterior design, the Toyota Corolla was the choice of the people looking for the “run-forever” reputation. 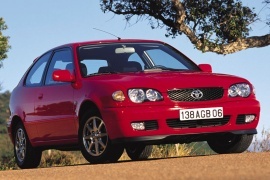 Introduced in 2000 and kept in production until 2002, the new Corolla represented the ninth generation of the car which is regarded as the most popular version of this model.
This Corolla version has also been used by Pontiac to develop the Vibe, which in its turn, was marketed by the Japanese company Toyota as the Voltz on the domestic market. Manufactured in numerous plants around the world (California, Japan, Turkey, South Africa, Pakistan, Vietnam, Indonesia etc.), the European flavor of the new Corolla was available in multiple engine versions, ranging from 1.4 liter gasoline to 2.0 liter diesel, producing between 89 and 215 horsepower. 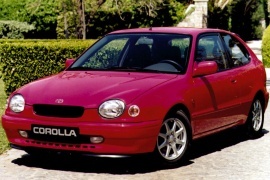 Already famous for their great reliability and excellent value for money, the Corolla range was updated in 1997.
Guiding their evolution process on the “If it’s not broken, don’t fix it” idea, Toyota managed to keep Corolla’s position on the market, thus it was awarded the world’s best selling car title in 1997.

The 3-door hatchback was upgraded along with the 5-door liftback, the estate and the saloon body styles.

While the previous models were greatly appreciated, Toyota noticed the customer’s need of a more fun-to-drive vehicle, thus excitement needed to be a word to define the new generation.

The new models came with a changed suspension, new fabrics inside, more lively design elements and a heavily redesigned exterior look, with revised headlights, a new grille and new taillights. The redesigned exterior also helped reducing the NVH levels with its flush-mounted side windows and other techniques borrowed from Lexus.

Both gasoline and diesel units were available, however, the Japanese market had a broader range of engines to choose from. Most Corollas were powered by a 1.8-liter all-aluminium DOHC 4-cylinder engine that developed 120 hp and 122 pound-feet of torque. Besides more power offered, the engine helped achieving a lower fuel consumption than its predecessor. 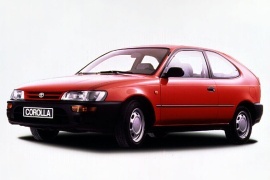 The seventh generation of Toyota Corolla debuted in 1993 together with a brand new model in this series which was larger and heavier than the previous versions.
The new Corolla, which was codenamed “Great Corolla” in Indonesia, was available in multiple body styles, including 4-door sedan, 3 and 5-door hatchback, 2-door coupe, 3-door liftback and 4-door station wagon. In comparison with the previous model of Corolla, a new 1.8 liter engine is now available. More transmissions were also introduced, as it follows: a 3-speed automatic, a 4-speed automatic, a 5-speed manual and a 6-speed manual on some markets. 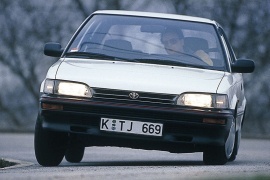 In the mid-80s, Toyota raised the bar and changed the game, noticing people’s desire: a car that would do more than just taking its occupants from A to B.
The new Corolla came to life under the newly promoted development leader Akihiko Saito’s supervision. His vision was pretty simple and complex at the same time, as he stated to his team: “I believe that the Corolla must erase the image of family cars of the past. Wouldn’t it be nice if the quietness and ride comfort of the Crown and the attractive appearance of the Mark II were achieved in a vehicle the size of the Corolla?”

With this idea in mind, the team focused on developing a powerful design regardless of the body style, while the new Corolla also had to be fun to drive.

Aesthetically, the new Corolla was wide and low, with more rounded edges compared to the previous generations. To give the impression of a luxurious vehicle, the A and C pillars were pulled closer together.

Toyota considered people’s opinions regarding interior design. Thus, they asked their customers to better understand what they were looking for: a note of luxury and increased comfort. The Corolla featured velour and thick-knitted fabric materials. Optionally, customers could choose a maroon interior color scheme that was rather seen in the most luxurious vehicles of the time.

All controls allowed easy operation, while Toyota gave great attention to the switches’ feel, besides the overall well laid out instruments.