The HiLux was one of the most appreciated pickup-trucks in the world for more than half of the century.
In 2015, Toyota introduced the eighth generation of the light-utility off-road vehicle.

The recipe for a pickup-truck was quite simple: a bed to load, a cabin to host the driver and its passengers, and an engine in the front. To make it better in off-road conditions, a transfer box and a low range gear completed the main ingredients. The HiLux ticked all the boxes and was offered with a few cab choices.

The HiLux was the best selling pickup-truck in Australia for more than a decade and the 2015 model was brought to keep that sales figures up. It was offered as a single-cab, Extra Cab, and Full-size Cab with four conventional doors. The front end design receives new headlights and a lifted bumper in the front, with two horizontal slats on the grille. The short cabin provided extra room for the bed, where longer items could have been loaded.

The Extra Cab provided a pair of jump-seats in the back, and a pair of half-size suicide doors. But don’t expect some comfort for those two places. The extra space in the cabin was a relief for tall drivers, who could tilt their seats backward. The dashboard offered an SUV-like design, with better materials and an option for a 7” infotainment system. It didn’t have that basic look of the older models.

One of the reasons why the HiLux was so successful was its reliability and its ruggedness. For the eighth generation if featured a new ladder chassis, stronger than before. For the 2015 model, the HiLux received a new range of engines, with either a 2.4-liter or a 2.8-liter turbodiesel unit. The older 3.0D4-D was retired. 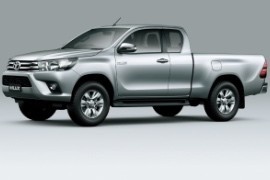