Toyota pushed the pedal to the metal and accelerated its development process for a complete transition away from fossil fuels.
The 2021 Mirai was a good example.

The idea of fuel-cell wasn’t new, and it was tried and tested by many carmakers such as Mercedes-Benz, BMW, or Honda. Toyota developed a platform to be used for various propulsion systems, from hybrid to electric or fuel-cell vehicles. The 2021 Mirai was the last addition and confirmed that Toyota would bring that water-powered vehicle sooner than expected.

Since it needed more tanks to store the hydrogen, Toyota used an extended wheelbase version of the Mirai platform to increase the storage capacity. Thus, the car could take up to 5.6 kg (12.3 lbs) of hydrogen, enough for up to 650 km (404 miles). But Toyota designers managed to shape the car in a fastback style, so, at a glance, it didn’t look that long. The front fascia featured an impressive lower grille with horizontal lines, while on its upper side, the LED headlights with enclosed daytime running lights mimicked an angry, aggressive face.

Inside, a fully digital instrument cluster was continued with a complete infotainment display placed on top of the center stack. The expansive center console hid one of the five hydrogen tanks. Toyota designed the interior for five adult passengers, but the broad and tall center tunnel didn’t leave too much room for the middle passenger. 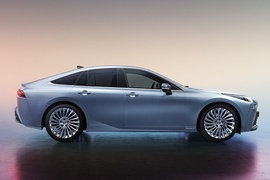