The Prius + was introduced in 2011 as an MPV based on the Toyota Prius platform.
Just four years later, it received a mild facelift to keep its sales up. It was also named Prius V.

The V in the name stands for Versatility and it was added to emphasize that the car could carry up to seven passengers. The heightened and extended roof made room for the third row of seats, where two not-so-big adults could sit. It was also good for carrying five adults and more luggage.

The 2015 model received some stylistic changes to the front and rear of the car. The car was fitted with the new LED headlights from Toyota, for both low and high-beam. They looked angrier. The fog lights were integrated into the bumper’s new grille. In the back, the taillights received a new design, with red and clear lenses.

Inside, the Prius V received a new, 4.2” TFT display between the gauges, depending on the trim level. For the roof, the car was fitted with an option for a resin Panoramic View Moonroof with power retractable sunshades. It was 40-percent lighter than a conventional glass roof of a similar size. The standard audio system was upgraded to the latest version of the Toyota Entune Audio, with a 6.1” touch-screen on the center stack.

The 2015 Prius V kept the same powertrain as before, with a 1.8-liter dual VVTI Atkinson cycle engine and an electric motor. It received more safety features such as lane departure alert and automatic high-beam. 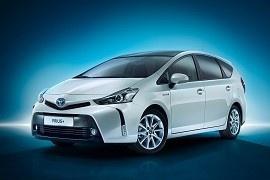