Adding an all-wheel-drive system to a car was never a bad idea.
But when that happened to one of the most known hybrid vehicles in the world, it’s great news.

Toyota has succeeded in promoting the Prius as one of the most important revolutions in automotive history. It was the car that made the hybrid vehicles desirable. Despite its arguable design, it was a big hit. It was introduced in 1997, and in 2015 it launched the fourth generation, which was revised in 2018.

There were not too many things that were modified from the outside compared with the non-facelifted version. The headlights were enhanced with a standard bi-LED system. The taillights used the same technology as well.

The 2015 model was introduced with a somehow outdated infotainment system, but the Japanese engineers fixed that on the 2019 model. All models received a central screen interface. On the 4.2” multi-information display, they added the AWD-e indicator. The color head-up display showed the speedometer, navigation, and hybrid indicator status. All 2019 Prius models, including the Prius AWD-e versions, came standard with Toyota Safety Sense P (TSS-P). It used millimeter-wave radar and a monocular camera sensor to help detect pedestrians, vehicles, and lane markers and headlights in the surrounding area 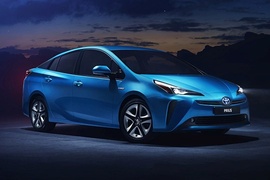