Toyota dropped the anonymity design from the Rav4 when it introduced the fifth generation of its compact SUV model at the 2018 New York Auto Show.
When the SUV sales started to rise, Toyota already had the first generation of the Rav4 on the market. Its well-known experience in the 4x4 segment and the trustworthy models transformed it into a best-seller worldwide. The car’s only drawback was its modest design, not bold enough for what the car was capable of. But that changed with the fifth generation.

The five-door Rav-4 featured an angular design at the front, with swept-back headlights and multi-stage A-shapes on the bumper and grille. Maybe the car designer responsible for that was a Darth Vader fan. On the sides, the sculptured door panels and enlarged wheel fenders reminded the customers that the carmaker was a capable 4x4 maker. In the back, the Rav-4 dropped the flat rear end and offered a raked-forward C-pillar and windscreen.

Inside, the carmaker continued the wedged shapes and, apart from the round steering wheel and climate control dials, all the dashboard lines were angular. A floating touch-screen display adorned the top of the center stack and featured the Toyota Entune 3.0 system. The front bucket seats separated by a tall center console were designed for comfortable rides, while in the back, the carmaker installed 60/40 split-folding seats with a lower center tunnel.

Under the hood, the carmaker introduced one gasoline engine and three hybrid versions paired either with an eight-speed automatic or a CVT. Front or all-wheel-drive systems were available. 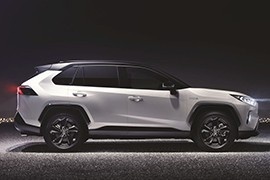