Toyota made the Sienna as a family carrier, and, in 2020, it unveiled the fourth minivan built for the North-American market.
The Sienna was planned to be unveiled at the 2020 New York International Auto Show, but due to the world COVID-19 pandemic, the show was canceled. The Japanese car-maker didn’t give up and unveiled it online in May 2020. The minivan was based on the Toyota TNGA-K platform (Toyota New Global Architecture-K) used for the Highlander range. But that didn’t transform the MPV into an SUV.

The exterior design was not one of the best in class, nor best in Toyota’s lineup. The front apron featured a grille so prominent that it almost covered it. There were only a few areas that were untouched by the horizontal slats. Above the bumper, the slim headlights, which might have fit better on a Camry, featured the daytime running lights. The greenhouse featured a slightly sloped roof and two thick, D-pillars in the back. The tailgate looked like the Corolla station-wagon inspired it. The sculptured door panels and rear fenders made the car a little bit more appealing on the sides.

The interior was the one that stood out with its three-row seating position. The ceiling was the mounting area for the rear infotainment system, so the back’s kids won’t get too bored before reaching the destination. The trunk was big, mostly if the third row was not in use.

The Sienna was fitted with only one powertrain: the hybrid system. It was powered by a 2.5-liter Atkinson engine and an electric motor. Both were mated to a CVT gearbox. 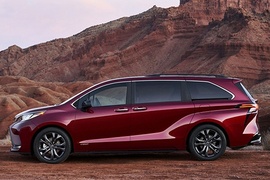