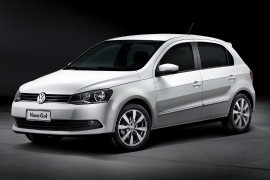 Volkswagen Gol was the most successful car on the Brazilian market and it was produced since 1980 as a replacement for the popular VW Beetle.
In 2014, the car already reached its third generation.

In 1980, Volkswagen was looking for a way to replace the cheap and reliable Volkswagen Beetle on the South-American market. It was just very hard to create something affordable to buy and cheap to run. So, the first generation was made on a mix of platforms and an air-cooled VW Beetle engine but mounted in the front. As the years went by, the car grew and changed market expectations.

The 2014 model was a facelift for the 2008 model. It featured a look closer to the European Polo in some details such as the headlights and the taillights. The Gol was available in a few shapes and sizes such as hatchback, sedan, or even as a pickup. The front bumper with a honeycomb lower grille and other stylistic details were unusual for a car from its segment.

Inside, the instrument cluster featured the same layout as from a European Volkswagen Golf 6, with an LCD display between the tachometer and the speedometer. The audio system looked like a carry-over from an older generation of Volkswagen products on the standard trim level, but a modern infotainment unit with Android Auto and Apple CarPlay connectivity was available.

For the engine, the Gol was available with a choice of two units of 1.0- and 1.6-liter. Both engines featured flex-fuel systems, with either gasoline or ethanol. The standard transmission was a 5-speed manual, and an option for 5- or 6-speed automatic was on the options list. 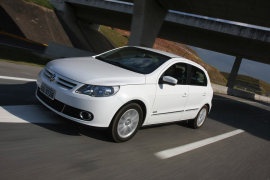 Volkswagen designed the Gol, especially for specific markets, with specific demands and, most important, lower prices.
The first generation of the Gol was introduced in 1980 in Brazil, and it was built on a specific platform, which was not used on any other Volkswagen. Fast forward to 2008, and the Gol reached its third generation. Unlike its predecessors, it shared its platform with the Polo.

Volkswagen developed the Gol as a hatchback, and it kept the same shape over the years. Other Volkswagen products inspired its design. The headlights were a mix between a Passat CC and a Tiguan design, but the overall look was unique to the Gol. Unlike its European siblings, which followed a more angular style, the South American brother featured rounded edges and a raked forward C-pillar. The Brazilian designers placed a roof-spoiler on top of the tailgate.

Inside, the Gol featured some parts carried over from Volkswagen’s parts bin, such as the instrument panel or the audio system, but the overall design was different. A pair of bucket-seats with high side bolstering was mounted at the front, and a split-bench found its way for the rear seats.

Under the hood, Volkswagen installed two market-specific engines able to run on ethanol and gasoline as well. Both versions were paired to a five-speed manual gearbox. A 5-speed automatic was available for the 1.0-liter engine, while a 6-speed automatic was on the options list for the 1.6-liter version.