Volkswagen designed the Nivus for the South American market and Mexico, but it planned to sell it in Eastern Europe.
It was an SUV-coupe based on the same platform with the T-Cross.

The Nivus hit the market in 2020, and it resembled a few models from the German car-maker stable but was a completely different vehicle. It wasn’t just a cut-out from an already existing model. The European customers became very interested in that SUV-coupe and asked Volkswagen to bring it to European countries.

The car’s front side featured long horizontal lines over the grille to make the car look wider. With its swept-back LED headlights surrounded by the LED daytime running lights, it didn’t make the impression of a budget-SUV, even if it was built on the MQB A0 platform, the base one used for the Polo. The raked A-pillars and the sloped-back roofline mimicked the shape of other successful, mid-size SUV-coupe vehicles. At least one of the two side-mounted exhausts was fake in the back, but offered a balanced look for the car.

Inside, some elements resembled the Polo. It featured an integrated 10” touch-screen on top of the center stack and a classic, analog instrument cluster. As an option, the instrument cluster was available as a digital display, connected with the infotainment unit. That was a premiere for the small-class crossover segment. Due to its short wheelbase, there was not too much room in the back, but at least the roof was sloped after the rear seats. Due to the bi-fuel system, the car was fitted with a 1.0-liter engine carried-over from the Brazilian Polo Sedan. The three-cylinder unit returned 116 hp when ran on gasoline and 128 when ran on ethanol. 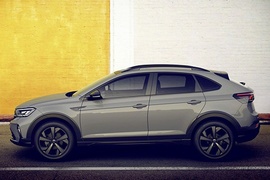