With over 30 million Passats manufactured over the span of seven distinct generations, the eighth iteration of the nameplate in plug-in hybrid Variant GTE guise was unveiled in 2019 alongside other versions of the mid-sized model.
With tons of features infused in the revamped model, most of it having been borrowed from the more premium car brands under the Volkswagen Group umbrella, the eighth generation of the Volkswagen Passat has received one of the most technologically advanced mid-cycle facelifts in the model’s history.

Inside, mostly thanks to new hardware and software, the new Digital Cockpit has been massively improved compared to the previous Active Info Display. With much enhanced graphics and improved features, the system now offers three various display configurations can be customized using the redesigned multifunction steering wheel.

The GTE plug-in hybrid has received a considerably higher all-electric range, with up to 55 kilometers being covered in the WLTP cycle, which correspond to approximately 70 kilometers in the old NEDC. Most of the changes that With the electric motor being paired with a turbocharged internal combustion engine, the combined maximum output of the two is a healthy 218 horsepower when used in hybrid mode. The mid-cycle revamp is less visible in terms of exterior updates, but there are new matrix LED headlights and even new interactive light functions thanks to the 44 LEDs in either of the two headlamps. 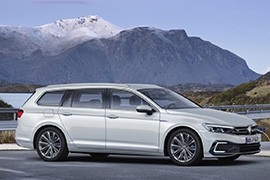