The 2013 Polo BlueGT represented the mix between a sporty little hot-hatch and an economic car, even if the price was not so low at the time of its launch.
But it offered very good features.

From the outside, the BlueGT version can be recognized due to its modified front bumper, which featured a larger air-scoop. From the side, the standard 17” aluminum wheels had specific design. A small roof spoiler was added on top of the tailgate. In order to achieve a better aerodynamic coefficient, the car was lowered by 15 mm (0.6”) compared to a regular Polo.

Inside, there were more special features. Like the rest of the Polo range, it had the infotainment system installed on the central console and a 7-speed dual-clutch gearbox (DSG). The real treatment was on the seat upholstery, which featured blue Alcantara and special stitchings.

The most important feature of the BlueGT was under the hood. Volkswagen installed a 1.4-liter TSI gasoline engine that offered 140 hp. That power was not unusual for a turbocharged engine of that size. The innovation was the cylinder deactivation. If it is almost normal for most of the V8’s to have such a system, it was unusual for a four-pot engine. That, combined with the intelligent gearbox, could reduce fuel consumption and lower CO2 emissions. But, when pushed, the four cylinders would come back to live in a split of a second and pull the car up to 210 kph (130 mph). 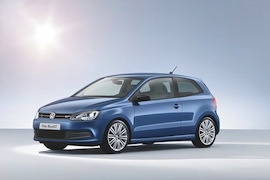