The third generation of the biggest Volkswagen SUV was introduced in 2018 and it was a major improvement over its predecessors.
It was not a mass-market vehicle anymore.

The German car-maker built the third generation on the same platform with the rest of the big SUVs from the group: Audi Q7, Bentley Bentayga, Porsche Cayenne, and Lamborghini Urus. Having said that, the Touareg was the most affordable package of some of the best-engineered cars from that segment. It wasn’t available with the top, specific, engines.

From the outside, the new, LED matrix headlights were a big step forward. The grille featured three horizontal chromed bars, amplifying the width of the car. The rest of the car featured simple lines that resembled a Passat Variant (station-wagon).

Inside, the Touareg shined at its best. It was the exact opposite of the bland exterior. On the center stack, the car-maker installed a huge, 15” touch-screen display for the infotainment system. The Digital Cockpit (instrument cluster) was 12” display. The only downside was the steering wheel, which had the same design as the one installed in a Polo. The rear passengers had plenty of legs- and head-room. The trunk offered a healthy 810 liters (28.6 cu-ft) of space and could have been extended by folding the rear seats to up to 1800 liters (63.6 cu-ft).

For the engine compartment, the Touareg was available with four engine options at the launch, ranged between 234 hp and 421 hp. The standard transmission was an 8-speed automatic, with all-wheel-drive for the entire range. 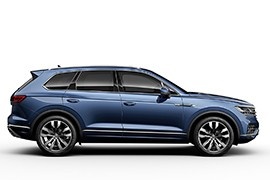