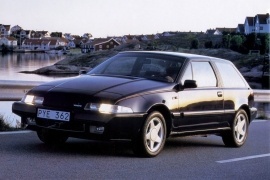 Volvo introduced the 480 in 1986 as a sporty hatchback and was the first front-wheel-drive vehicle designed by the Swedish carmaker.
While the new hatchback segment started to conquer the compact segment, Volvo was still trapped in its old-fashion school, where its designers used only a pencil and a ruler to create a car. The 440 and the 760 were just a few examples, and the 480 was on the same page.

The 480 project started in 1978, but it was not considered a priority by Volvo’s management, and it was postponed until 1986 when the final car made it to the Geneva Motor Show. Everyone was in shock! Worth mentioning that Volvo never had such small vehicles. But it was a different kind of vehicle that proved to be not as sporty as it intended but reliable as any other Volvo from that era. Its pop-up headlights and fixed stationary lamps in the wrapped-around plastic bumper showed much better than most of its competitors. With its three-door architecture and raked-forward tailgate, it created a sporty look.

Inside, the 480 was the strangest Volvo ever built to date. It offered two seats at the front and two individual seats in the back. The wide instrument cluster covered the center stack as well, where the carmaker included the audio system, the ventilation, and several gauges for the turbocharger, ammeter, and oil pressure. An instant and average fuel consumption gauge stood on the right of the speedometer in the instrument panel. That was an unusual feature for a 1986 car.

Under the hood, Volvo installed Renault-sourced engines with or without a turbocharger. The most powerful version offered 120 hp, enough to drop the 0-100 kph (0-62 mph) time under ten seconds.