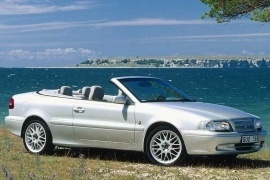 The late ’90s showed an invasion of medium size convertibles on the premium market.
Mercedes-Benz had the CLK, BMW had the 3 series and Volvo opened its C70 coupe.

In the mid-’90s, Volvo introduced its first coupe after the boxy design 740 Coupe. Not only the design was new, but also the styling. While the 740 was shaped in straight lines, the C70 was rounded all the way. It was a new school of design and it was one of the best looking coupe on the market at the time of its launch. And that was unusual since it came from a car that didn’t have a rounded shape in its inventory.

The shorter grille, curved and shaped headlights, and the raked A-pillars for the curved windshield were in perfect harmony with the rest of the car. The curved rear fenders and the taillights were in the same spirit of the car.

Inside, there were four seats, with more room for the front passengers and very limited for the rear ones. Finally, the dashboard didn’t look like a piece of industrial equipment anymore, and a modern look for the instrument cluster enhanced the look of the cockpit.

The convertible version looked very good even with the top up, not only with the roof down. And that was not an easy task for the Swedish company. But they worked together with Pininfarina Sweden studios in order to achieve that. While the car was, initially, intended for the U.S. market, in the end, it had a bigger than expected success on the European market as well.