There are three key ingredients for a sports car: low weight, perfect weight distribution, and more power, and the Wiesmann GT MF4-S had them all.
Derived from the standard MF4 Coupe, the Wiesmann GT MF4-S was the lighter and faster version of its luxurious brother. While some customers were happy with their standard vehicles, others asked the car manufacturer to build them a sportier version, and thus the -S version appeared.

There were some minor exterior changes between the two versions. In the GT MF4-S, the front spoiler featured a mesh-grille on the apron and a lip underneath. Its dual Xenon-headlights fitted as standard showed a better view during night driving. At the back, the carmaker changed the taillights and included the reversing lights in the lower lamp, while the fog-lights were moved lower. A speed-dependable rear wing found its place under the windscreen.

Inside, the customization program was extensive and allowed the owner to chose colors and a combination of features. What it couldn’t change was the automatic transmission. The shift-buttons on the steering wheel were also fitted as standards. Wiesmann installed four gauges on the center stack, two larger dials for the tachometer and speedometer, and a clock.

Under the hood, the carmaker dropped a BMW M3 V-8 engine that provided 420 hp. It was paired as standard to a seven-speed automatic (dual-clutch) gearbox. Thanks to the lightened vehicle, it offered thrilling experiences for those who asked for more from the retro-modern German coupe. 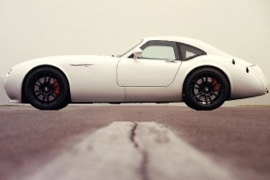