Inspired by older British cars, the Wiesmann brothers produced cars for petrolheads with deep pockets and a real need for speed attitude backed up by driving skills.
The German car manufacturer was established by two brothers: one engineer and one businessman. They started in 1993 when their first roadster left the workshop. Later on, the small company launched other products in convertible and coupe shapes. But there was one thing that remained constant: the powertrain carried over from BMW, and the MF5 was the most powerful version produced by the small, Dulmen-based enterprise.

Designed as a sporty British coupe from the ’60s, the MF5 was packed with modern technologies. Its rounded shapes of the bodywork and ample front wheel fenders were part of the retro-style design. The round headlights with clear lenses were far better than the ’60s best headlights. As for the bumper, well, there was none. The crash-protective elements were well hidden behind the front fascia. Wiesmann believed that a true, hard-core sportscar had to feature a minimalist design, and that’s how it did it. In the back, the carmaker installed four LED taillights grouped by two. An impressive wing adorned the trunk lid, and it wasn’t there just for the look.

The interior was manually crafted, and there was even an iPhone connection cable in the armrest. There was only a small cluster in front of the driver, where the car showed the gear and a few lights. The speedometer and other gauges found their place on the center stack, tilted toward the steering wheel.

Under the hood, Wiesmann installed a twin-turbo V-8 engine from BMW. It produced 555 hp, which transformed the beautiful and elegant coupe into a rocket since its weight was just 3,241 lbs (1,470 kg). 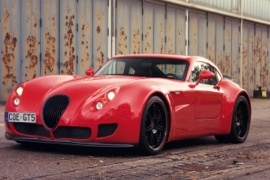