If a BMW Z3 and a Nissan 350 Z would have a child, it should look like the Zender Straight 8.
But the name was mesmerizing. Hence the little roadster didn’t have a straight-eight engine.

After ending his racing career, Hans-Albert Zender started his own company to develop special projects for carmakers. He worked closely with manufacturers such as Volkswagen, Opel, Alfa Romeo, or Ferrari. It aimed to combine styling with performance, and its company succeeded with many projects offered to the carmakers. It was a custom-car maker that dedicated its passion and engineering skills to develop road-legal vehicles and prototypes. Zender advertised its small company with a small roadster on the market, but it remained as a concept-car shown at the 2001 Frankfurt Motor Show.

Imagined in the new trend of new-edge design trend, the Straight 8 featured long lines and sharp edges on the hood. Its vertically mounted headlights swept-back over the front fenders resembled those installed on the Ford StreetKa and the Nissan 350Z style design. A pair of big side-scoops helped cool the disc-brakes, while a flat panel with air-intakes helped cool the engine. It’s very raked windshield offered a very aerodynamic look of the car.

Inside, the small cockpit featured a pair of seats and an interesting look for the dashboard. Zender installed only the tachometer in front of the driver, while the speedometer and the other gauges were moved on top of the center stack in the old-fashion way of the ’30s roadsters.

Under the hood, Zender installed one of the best inline-six engines available at that time, the 3.2-liter BMW M3 engine. It offered a specific power of over 100 hp/liter without a turbocharger. 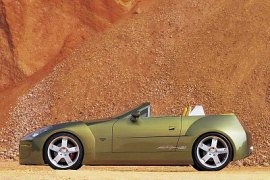