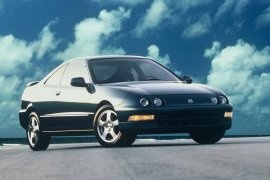 Acura introduced its third generation Integra to the North American market in 1994, one year after its launch as a Honda model in Japan.
The new version on the Acura Integra was now available with 3-door hatchback and sedan configurations and powered by either a 1.8L RS engine delivering 142 hp or a newly-developed 1.8L GSR 170-hp unit. The 3-door hatchback version of the Integra underwent minor exterior changes in 1998, receiving new front & rear bumpers, redesigned headlights and leather interior. As a low point, the new Integra model was rated as one of the most thief-friendly cars in North America. 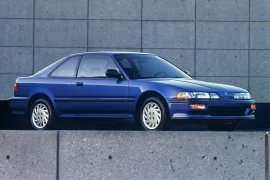 The second generation of the Acura Integra was bigger and heavier than its predecessor and that brought some disappointment from its buyers.
But its good handling and sporty engines brought them back.

With an increase in the sport-compact market, Honda tried to stay on top with the little Acura Integra. It shared some components with the Honda Civic, but it was the styling and some particular engines that made it more desirable than the popular Civic, despite its higher sticker price. In terms of volumes, it didn’t count when compared to its Honda sibling. In terms of smiles/miles, it was way ahead.

The wedged-shaped exterior, with windows almost flush to the body panels, the Integra was a coupe with a liftback. The slim and wide headlights were different than other cars on the market. In the back, the squared taillights were integrated into the rear panel.

Inside, the low-mounted dashboard allowed a better view of the road. The four-spoke steering wheel looked carried away from the Civic. The gauges definitely were, but the shape of the instrument cluster was slightly different. The seats were bolstered for better side support during high-speed cornering, a chapter where the Integra excelled.

Under the hood, the Japanese engineers installed several gasoline engine versions, including a 1.7-liter unit that offered 160 hp on the GSR model. The basic version was the 1.8-liter unit with 20 hp less than the GSR. Both versions were mated to a 5-speed manual, but the GSR featured shorter gear ratios, for a better quarter-mile run. 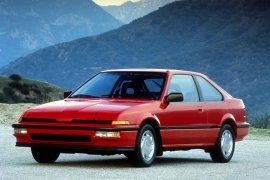 Acura introduced its brand new Integra model to the US market in 1986, a year after its Honda launch in Japan.
The 3-door hatchback version was based on the Honda Civic and powered by a newly-developed 1.6 L DOHC 4-cylinder engine delivering 113 hp. Other interesting features about this model included 4-wheel disc brakes, redesigned suspension and classy interior. Two years after its launch, the Acura Integra engine received a 5-hp power boost thanks to an electric advance distributor, while producing the same level of torque as the initial models. This led to bad publicity and forced Honda to speed up its development programme for a new generation Integra.