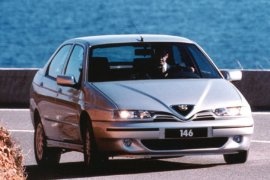 Introduced at the 1994 Turin Motor Show, the new Alfa Romeo 146 was designed as a 5-door hatchback replacement for the old 33 model.
The 146 was available to the large public at the same time with the 145 model, the only difference between the two cars being the door configurations (2 doors on the 145).

This mid-size hatchback was based, like most of the upcoming models, on the Fiat Tipo platform and featured a more conservative exterior lines as compared to its 3-door ‘brother’. In 1996, Alfa introduced a new TI variant for the 146, featuring a brand new 2.0-litre Twin Spark engine. One year later, all engines on the Alfa 146 model were replaced by Twin Spark units.

Early models came in with a longitudinally mounted engine, overhanging the front axle, but then the automaker decided to stick with a transverse setup. Both configurations were using 5-speed gearboxes. The model also relied on a unibody structure, with MacPherson strut and rear trailing arm suspension as well as rack-and-pinion power steering.

The Alfa 145 was slightly modified a year before its discontinuance, featuring color-coded bumpers, new-designed mirrors and standard side airbags.