Renault dug deep into its past, extracted the Alpine badge, and placed it on an entirely new car designed to beat Porsche Cayman.
Back in the ’60s, the Renault Alpine A110 won the Monte Carlo Rallye. It was a light and nimble car that slid around the snowy curves with the grace of a ballerina. Its handling helped it win the race a few times. As time went by, the car was improved, until it became too expensive and the sales dropped, and Renault pulled the plug on it. In 2016, the French carmaker revealed a concept car that recalled the shape of the original A110 and, in 2017, it launched the production model.

At the front, the quad headlight design with a round LED shape for the DRLs resembled the older model. Even the profiled line from the front’s trunk lid recalled the original model. It was a retro-design done well. The aerodynamic package was new, with a wide lower front grille and two side vents placed in front of the wheels, and those were functional. Its profile revealed a sloped rear window, similar to the one from the 1962 Alpine. With its LED taillights and the center-mounted exhaust, the rear side looked different from the original, and that was a good thing.

Inside, the carmaker installed sport bucket seats with high bolstering to keep their occupants in place during high-speed cornering. Its dashboard featured a digital instrument cluster with a design that recalled the original Alpine. A tall bridge connected the center stack with the center console, leaving a small storage area underneath it.

But the most important part of the mid-engined car was the drivetrain. It carried over the powerplant from the acclaimed Renault Megane RS but upgraded up to 292 hp for the top version. The standard gearbox was a seven-speed, dual-clutch automatic. 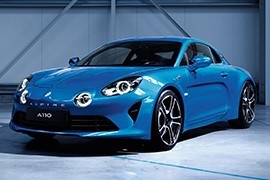