While the Atom started as an ultra-light open roadster fit for two and powered by a naturally-aspirated four-banger, the 2011 Atom V8 was a different kind of animal.
In 2007, the Atom was powered by a humble, naturally-aspirated inline-four, then customers asked for more power. Then it the Atom was fitted with a Honda Civic engine that boosted its power to 300 horses thanks to a supercharger. This time, the customers were pleased. But something was missing from that supercharged engine: a V-8 sound. That came in 2011 in a 25 units limited production run and a price tag that could match a Porsche Turbo or a Ferrari 458.

The Ariel V8 sported a new wing in the back that pushed the back of the roadster harder to the ground, increasing the traction. The carmaker placed two squared wide air-intakes for the engine on the sides, which differentiated the V8 from its inline-four siblings.

The Ariel Atom V8 was that little something that made a difference. Something like a meal with or without salt and pepper. It started as a one-off vehicle, an experiment when the factory installed a rev-happy 2.4-liter V-8 at the back of an Atom chassis. In the end, the carmaker rounded up the engine to a three-liter displacement capable of doing 10,000 rpm and squeezed 500 ponies out of the naturally aspirated V-8. The engineers paired it with a six-speed sequential gearbox, which featured a clutch that wasn’t needed while driving it hard, neither for the upshifts or the downshifts.

Thanks to that combo drivetrain, the Atom was capable of matching a Bugatti Veyron Supersport in a 0 to 62 mph (0-100 kph) run. 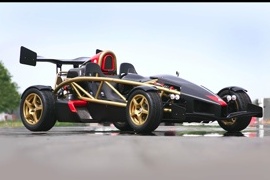