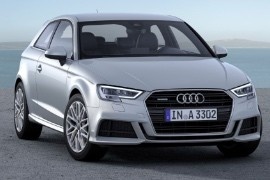 More expensive than the Ford Focus or the VW Golf, the Audi A3 offered a roomy cabin with nice luxury touches.
Sharing its platform with the VW Golf and the Seat Leon, the A3 was a better choice.

While the exterior design was very similar to the previous generation’s, the cabin was fitted with high-quality materials and advanced technology.

Visual updates included a redesigned front end with new headlights and larger air intakes, while at the back the A3 featured new stoplights and a slightly redesigned rear bumper.

The new model featured the Audi’s Virtual Cockpit with a 12.3-inch touchscreen display with loads of information to offer without distracting the driver.

The customers could connect their mobile devices using the integrated Android Auto or the Apple CarPlay systems. The optimised MMI controlled made everything easier to action.

To enhance utility, a wireless charging pad was placed under the armrest.

Practical to live with, the A3 offered a roomy cabin with enough head, leg and shoulder room for all of the occupants.

The cargo area was comparable to the VW’s Gold, with plenty of space for luggages.

The new 2016 model offered a choice of 6 engines, three gasoline and three diesel powerplants. The power ranged from 110 hp to 190, while all models compliant to the euro 6 standard. 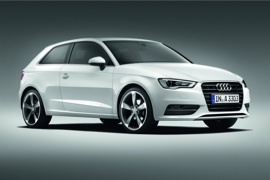 The third generation of the Audi A3 was unveiled at the 2012 Geneva Motor Show.
It was lighter, better equipped, and offered a better fuel-efficiency than before.

After the Dieselgate, the German brand had to develop and launch cleaner cars to prove that they are eco-friendly. The Audi A3 was a good starting point since it was one of its top sellers on the market. A lighter car with better fuel-efficiency was exactly what it needed.

The car was lighter by 80 kg (176.4 lbs) than the previous generation. It featured a better drag coefficient of just 0.32 due to its narrower frontal area and a raked windshield. The two, large, doors were sculptured to allow a better air-flow on the sides of the car and, in the back, a roof-spoiler was added for both aerodynamic and aesthetic purposes. The car had the same length and height as its predecessor, but shorter overhangs and longer wheelbase.

Inside, the A3 offered a dashboard tilted toward the driver. It was offered in three trim-levels: Attraction, Ambition, and Ambiente. Four large air-vents with a pin in the middle adjusted the air-flow inside the cabin. The front seats were bolstered even for the base model, while the optional seats in the Ambition (sportier) version were bucket-seats. The rear seats offered enough legroom for adult passengers and decent headroom due to the lowered bench.

The 2012 A3 was built on the new MQB platform shared with more cars in the Volkswagen Group. It was available with both gasoline and diesel units, with manual or automatic transmission. Some versions were offered with the quattro all-wheel-drive system. 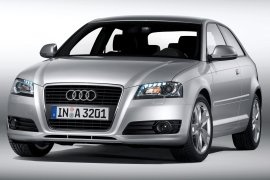 The second generation of the Audi A3 was launched in 2003 and it received a facelift in 2008.
The upcoming regulations forced the German premium car-manufacturer to do some changes.

Audi took a serious gamble when it launched its first generation of the A3 back in 1996. The little hatchback was built on the same platform as the Volkswagen Golf and some critics said that it was just a more expensive Golf. The second generation came to change that perception and added not only more style but also exclusive features and amenities.

The second generation has received new engines and an improved design. It was still based on the same platform as the Golf. In 2008, the facelift brought some changes for the premium compact car. It was offered in three body versions: three-doors, five-doors, and a convertible with soft-top. The front “single-frame” grille introduced by the A8 gained more fans and it was also installed on the A3. A redesigned front bumper was installed as well.

Under the hood, there were engines from as little as a 1.2-liter up to a 3.2-liter V6 unit. Among them, the RS3 version featured a 2.5-liter inline-five unit that was the most performant version of the A3, named RS3. Depending on the engine and trim level, the A3 was equipped with manual or DSG (dual-clutch) gearboxes. 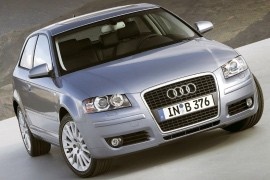 Audi launched the second generation of the A3 in 2003, and just a year later, in June 2004, it introduced the five-door version that came with a mild change at the front.
The five-door version was introduced at the mid-life of the A3’s first-generation after Audi understood that its customers would buy it, and they did. The car was a big success. But the second generation started with slow sales, and the German carmaker had to do something quick to fix that.

In 2004, along with introducing the Audi A3 Sportback (the five-door version), the carmaker changed the car’s front fascia. The single-frame grille became taller, and the new headlights looked more appealing. Both bumpers had to be changed to fit the new styling. The five-door version was also longer by 80 mm (3.14”) to accommodate the rear passengers. But there was not too much room for their legroom and headroom. Like most of the facelifted cars, the taillights were modified.

The interior was dominated by Audi quality, but also by dark colors and silver trims. In terms of logical layout, everything was about where you’d expect to be, but it didn’t have the appeal of an Alfa 147. The A3 was considered a premium Volkswagen Golf since it was based on the same platform.

All vehicles had to comply with the Euro 4 engines starting with 2005, and that was the major change for the 2005 Audi A3 lineup. The base version was fitted with a 1.6-liter naturally aspirated gasoline unit that offered just 102 hp. For the diesel fans, the base was the 1.9-liter TDI unit. Most of the cars fitted with diesel engines were subject to the Dieselgate scandal. 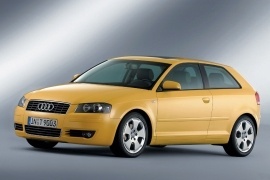 There were not too many compact-segment premium hatchbacks in 2003 when Audi introduced the second generation of its Golf-based vehicle.
When Audi launched the first generation of the A3, many people laughed and asked why someone would pay more money for a stylish Golf. But the German carmaker proved that it was the right car at the right moment. Even though it shared its underpinnings with its more famous brother from VW, it had some extra features that made the A3 a best-seller.

Walter da Silva penned the A3’s second generation and installed the new front grille design theme introduced on the Audi A8 W12. Unlike the A3 Sportback, which was longer and featured five doors, the A3 offered only two wide ones. Its look, with an ascending beltline and raked-forward C-pillars, showed a sportier image than its sibling. Even though it was based on the same PQ35 platform as the Golf, it looked different. At the back, the car received a new bumper and corner-mounted taillights, smaller than on its sibling. Its third stop-light was installed on the roof spoiler.

Inside, the carmaker installed a new instrument cluster with a four-dial layout where the speedometer and tachometer flanked an LCD. At the same time, the upper side of the panel showed the fuel level and coolant temperature gauges. Depending on the trim level, the A3 featured either wood or aluminum trims. At the front, there was room enough even for tall occupants, but in the back, the carmaker offered limited legroom when compared with the five-door version. Still, it was adequate for average-sized passengers. 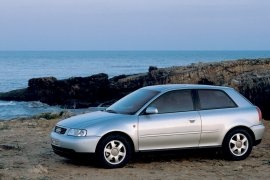 The first generation of the A3 was the first compact-hatchback Audi in the premium segment.
The result exceeded expectations and, over time, evolved from a simple, 3-door hatchback, into a full range.

In 1993, BMW launched the E36/5 3-Series Compact as a 3-door hatchback. It was a link to an older BMW 1600 hatchback from the beginning of the ’70s. The result was surprising. With a relatively small budget, the car was launched on the market and it found its niche. Audi followed in 1996 with the A3, based on the existing platform of the Volkswagen Golf IV.

Unlike the BMW, the Audi A3 was a completely new bodywork than the rest of the stable. Narrow headlights, small grille, and a simple look. The raked rear-end offered a sportier look to the compact-hatchback than the Golf. Three years after the launch, the A3 received the 5-door version, named Sportback. In 2000, the A3 was facelifted and received new headlights and taillights, along with other bumpers.

Inside, a blue-backlight instrument panel took some of the dials and buttons from its bigger brothers, such as the A4. A high center console and flat center stack fitted with the stereo and climate control offered a better look than the simple, mass-market, Golf.

The A3 was introduced with three important engine options: a 1.6-liter, a 1.8-liter 20 valves, and a 1.9-liter turbodiesel with direct injection (TDI). They were mated to a 5-speed manual gearbox. Later on, a 1.8-liter turbocharged unit was introduced. After the facelift, the A3 was heavily revised on the drivetrain that included the S3 hot-hatch with 225 hp under the hood and all-wheel-drive system, the same found in the Audi TT. An automatic transmission was offered for selected engines.