The e-tron was the first fully electric car built by Audi.
It was shown as a concept car at the 2015 Frankfurt Motor Show. The first cars were delivered in 2019.

In the quest for green motoring, some car-makers build their electric vehicles to look like a statement. Tesla Model-X or Jaguar E-Pace were designed to look different. On the other hand, the e-tron took a different path. It was built on an existing platform in a shape that was already known for customers who didn’t want to prove anything special.

The front fascia of the e-tron was dominated by the big singleframe grille. Even though electric cars need cooling for the motors and the batteries, they don’t need the same big radiators. But the singleframe was still in place. It was painted in titanium-gray, which became a trademark for Audi’s electrified models. On the sides, the car featured an option for two slim side-arms for rear-view cameras, instead of rear-view mirrors. The e-tron was equipped with a full LED light system for headlights and taillights.

Inside, the e-tron offered only seating for five. It featured only digital displays for the instrument cluster, infotainment system, and two smaller screens on the doors for the rear-view cameras. It featured Valcona leather seats and natural wood inserts in the cabin, to enhance the luxury experience.

The e-tron featured two electric motors, one for the front and one for the rear axle. The 95kWh and 700 kg (1543 lbs) battery pack was placed between the axles, in the floor. It was available with either a 120 kW charging system or 150 kW, while a standard 9.6 kW AC (11 kW AC for Europe) capsule charger was provided and designed to deliver a fresh charge overnight. 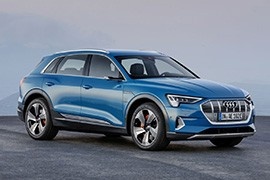