The Audi R8 looked stunning in 2006 when it appeared on the market.
The second-generation kept what was good on its predecessor, and added more features. It was more pleasant.

The second generation of the R8 was offered with a lighter version, named V10 Plus. It was a car fit for those who were on the market for an everyday supercar. Some parts from the standard V10 model were replaced and exchanged with carbon-fiber elements, which were lighter. For the open-top version, named Spyder, the R8 also featured the Plus version.

What is more attractive than an everyday supercar? An everyday roadster supercar. And Audi R8 Spyder V10 Plus was exactly on the niche market for that type of client. Those who were enjoying driving with the top down and a full blast of fresh air. The front side of the R8 Spyder Plus featured the same grille and side-intakes to cool the big brake kit. On the sides, the sculptured doors and panels were made to allow more air to run into the engine’s radiators. In the back, a fixed-wing was installed behind the engine hood, which was in the mid-rear part of the car.

Inside, there was the same cramped two-seat model, but with enhanced sport-bucket seats. A full-digital instrument cluster named Audi Virtual Cockpit was installed in the instrument cluster. Another infotainment unit was mounted on the center stack.

The V10 engine offered 610 hp screaming at up to 8700 rpm is a carry-over from Lamborghini, with which the R8 shared its platform. But the Audi wants to be more civilized, more able to tackle normal daily driving conditions. And that is why it can cut down to 5 cylinders to save fuel. 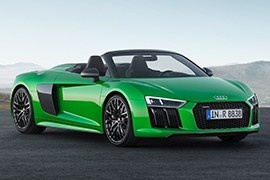