Twenty years after the original Audi TT came on the market, and the compact-coupe still looks fresh and strong.
In 2018, Audi introduced the TTS stronger and faster than before. The exterior has been changed discretely and brought a new three-dimensional Singleframe radiator grille design and larger side air inlets.

The TTS Black edition received further upgrades with a new full-length front splitter flanked by vertical inlets, exclusive side sills with inserts and, at the rear, vertical air inlets with horizontal fins below the rear lights and a different diffuser.

Inside, the driver has the Audi Virtual Cockpit, which featured an additional sport display, providing information on engine output, torque and g forces. Inside the air-vents from the central part of the dashboard, the designers installed displays for temperature, air-flow, and fan speed. A nice space-saving method.

But usually, those who are buying a performance coupe are more interested in the numbers. Even though the TTS lost 4 hp compared to the non-facelift version and the 2018 model had 306 hp. It gained a little in the 0-100 kph (0-62 mph) sprint. This is maybe because it gained a little bit of torque or due to the standard 7-speed DSG (dual-clutch) automatic gearbox.

The TTS featured the quattro all-wheel drive system from Audi and it had a lowered suspension by 10 mm (0.4”) compared to the rest of the TT range. It also featured the Audi magnetic ride adaptive damper control, 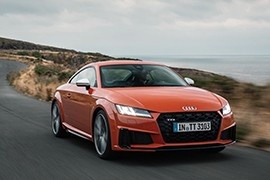