BMW released the 4 Series Gran Coupe in mid-2021, just a couple of days after it refreshed stablemates X3 and X4.
When the German carmaker decided to split the 3 Series into two distinct models, the customers didn’t seem too happy. At first, the difference between the two twin brothers was just the door numbers. Even the former 3 Series Gran Coupe became a 4 Series Gran Coupe, but without too many changes. But that changed starting with the G26 generation.

One of the most controversial parts of the 4 Series was the front fascia, which featured an oversized and tall kidney-grille with chromed surroundings and a 3D mesh pattern, but it resembled the former BMW 327 from 1937 and 1952 501. Its LED headlights looked mean and aggressive. Like its predecessor, the 2021 4 Series GC featured frameless windows for all the doors. Thus, it stayed in the four-door coupe league, with a sloped-down, fastback-like tailgate. The streamlined taillights create the illusion of a more comprehensive vehicle at the back, thanks to their horizontal LED lines.

Inside, the upgrade in the technical department was significant. The base models featured an 8.8” screen above the center stack for the iDrive infotainment system and a 5.1” color display in the instrument cluster. At the front, the high-bolstered front bucket seats provided enough side support for their occupants during high-speed cornering maneuvers. In the back, there was a bench for three adults. Even though the transmission tunnel was present, it wasn’t that tall anymore and narrower. Thus, the rear middle passenger could place his or her feet under the left and right front seats. The 60/40 rear bench’ seatback increased the trunk space from 470 liters (16.6 cu-ft) up to 1,290 liters (45.5 cu-ft).

Under the hood, the carmaker provided an engine range fit for a sporty four-door coupe. The base version featured a four-banger, turbocharged gasoline unit, while the top of the range M 440i received a 3.0-liter inline-six turbocharged powerplant. 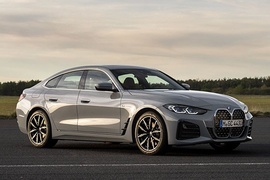