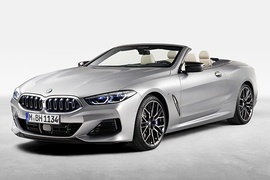 BMW refreshed the entire range of the 8-Series in 2022, and that included the open-top version as well, adding more refinement, more technology, and small design cues to the beautiful drop-top grand tourer.
The first generation of the 8-Series, the E 31, was introduced by the carmaker in 1990. In its coupe version, it was an instant success despite its high price. Its only flaw was that it was not available as a convertible. Later on, after it was withdrawn from the market, the coupe version gained traction. In 2018, the carmaker decided to re-launch the respectable nameplate and give it a second chance. This time, it did all the things right.

For the refreshed version, BMW applied an M aerodynamic package to the whole range. Its front bumper featured a V-shaped grille in bumper, flanked by the air-scoops that channeled the air to the front brake discs. Behind the wheel-wells, a set of extracting vents helped the vehicle decrease the drag resistance. For the roof, BMW opted for a classic fabric top. Like the non-facelifted version, the car needed just 15 seconds from the top up to top-down. Inside the cabin, there was hardly room enough for four passengers.

Under the hood, surprisingly, BMW still offered a turbodiesel version for its elegant and fast grand tourer. Yet, it enhanced it with a hybrid system to get lower CO2 emissions, in line with the 2022 requirements. Power went to the rear or both axles, depending on the version. 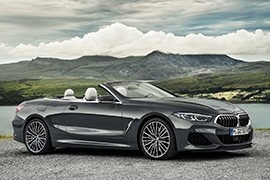 The first ever convertible version of the 8 Series nameplate was part of a three-model lineup that found themselves at the very top of the BMW range.
The 8 Series name itself has been resurrected in 2018 for the 6 Series replacement.
The classic soft-top roof could be opened or closed in just 15 seconds at driving speeds of up to 50 kph (31 mph) and could be had in either black or silver. Only two engines were available at first, both being paired with an 8-speed automatic transmission and xDrive all-wheel-drive.
The 840d xDrive Convertible used a 3.0-liter diesel with two sequential turbos and has a 320 hp and 680 Nm (505.5 lb-ft) of torque. The M850i xDrive, on the other hand, featured a 4.4-liter twin-turbo V8 gasoline mill with 530 hp and 750 Nm (553.2 lb-ft) of torque.
The interior of the car was very well thought and BMW concentrated on the quality of materials.
The infotainment system consisted of a 10.3 inch touchscreen which was the best on the market at that time. Voice control was standard and the car was equipped with Apple CarPlay. Android auto was not offered.
The seats were very comfortable and were offered with lots of adjustments. Due to their low position and the high window line, the driver did not have as much visibility, however, the car was equipped with front and rear parking sensors, a rear-view camera and LED headlights as standard.