BMW came late to the electric-SUV revolution, but it didn’t come empty-handed.
It brought a vehicle that could match, and overtake, most of its competition.

When Tesla stormed the automotive industry with the Roadster, there were just a few to see the revolution that was about to happen. As the electric car interest started to rise, the big carmakers began to research and develop new products. BMW’s first strike was the i3, and it announced that the BMW-i would become a separate, electric, brand. In 2020, it showed its next product, the iX.

Love-it or hate-it! That was what BMW might have said when it showed the vehicle with the massive grille at the front. The big kidneys were useless, apart from the aesthetic purpose. The narrow LED headlights formed a frontal fascia that resembled one of the Transformers robots. The overall shape resembled other X-models from the German carmaker’s lineup.

Inside, BMW installed a futuristic, sloped dashboard, which inspired more of a concept-car than a production vehicle. The curving, one-piece display served as the central control element reinterpreting BMW cockpits’ traditional driver-centric design. That was made by bringing together the 12.3-inch Information Display and the Control Display with its screen diagonal of 14.9 inches to form a single unit angled towards the driver. The front seats featured integrated headrests for more comfort for their occupants. In the back, a 40:20:40 bench with a three-way split-folding seatback was installed to increase the trunk area.

BMW powered the iX with 500 hp electric motors that. The big battery pack installed inside the floor offered a 600 km (372 miles) range. 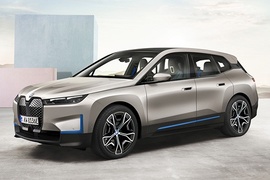