The M2 was a serious sports car that made many people ask if it wouldn’t be a better track-car than the bigger M4.
With the introduction of the Competition version, the answer was even difficult.

The German carmaker had a thing with the sport-compact sedans ever since the first BMW M3 was introduced in the ’80s. Even though that car was built to get the FIA’s race-approval, the carmaker insisted and developed a complete range of M-Power vehicles. The M2 was the smallest, but not the slowest.

The M2 Competition received a new bumper and specific air-intakes to cool the brakes and the engine from the outside. The enlarged BMW kidneys were painted in black, improving the aggressive look of the car. The side vents on the front fenders were black as well. The four exhausts mirrored the same color in the back, differentiating the M2 Competition from the other M Competition models. The M2 Competition was available with an exclusive color: Hockenheim Silver.

The interior was fit for a day at the track with sport-bucket seats at the front. The M2 competition badge was embroiled on the front seats’ seatbacks and was present on the door-sills. For the instrument cluster, the designers chose a black background with red needles and white lettering.

The most important elements were on the technical sides. The 3.0-liter, twin-turbo engine offered 410 hp. It was mated to a standard 6-speed manual gearbox while a 7-speed automatic (dual-clutch) was on the options list. An electronically controlled rear differential offered the best traction available. 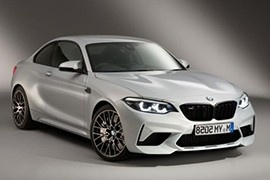