The M4 CS was built only two years and it sat between the M4 with Competition Package and the M4 GTS.
It was the best balance between a race-focused and a road car.

While some other car manufacturers are building either a performance car or a track-ready vehicle, BMW decided to go mid-road with the CS. It took some parts from the M4 Competition and some parts from the GTS. After the mix was done, it added some specific features.

On the outside, at the front, there was a lip-spoiler at the bottom of the apron. It was made out of carbon-fiber but it was fixed, while the GTS had it adjustable. The hood was made out of carbon-fiber as well as the one found on the GTS. In the back, the CS featured a specific lip on the trunk. For the wheels, the car was fitted with 19” light-alloy wheels in the front and 20” wheels in the back, equipped with Michelin Pilot Sport Cup 2 tires.

Inside, there was a mix of race-inspired features and comfort. The door panels and the seats were carried-over the GTS. The suspension was taken from the Competition model. The infotainment system was similar to the one in the regular M4.

Under the hood, there was the same inline-six unit with two turbochargers that offered more power than the M4 Competition Package. It was fitted to a standard 7-speed automatic (dual-clutch) gearbox, and that was the only transmission available. 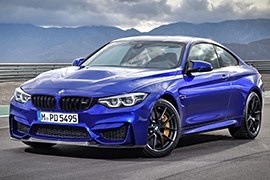