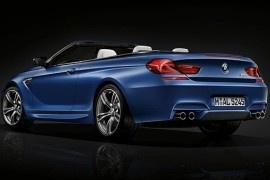 BMW introduced a mid-life cycle impulse for the M6 in 2014, which affected both the coupe and the convertible versions.
While the first generation of the 6-Series was available only as a coupe, the carmaker changed its mind and offered it in a convertible version starting with the second generation in 2003. It continued doing that even for the most powerful version, the M6. In 2011, BMW introduced the third generation of the 6-Series, with an M-version in 2012. The entire range was refreshed in 2014, including the M6’s open-top version.

The refreshed styling included a redesigned front fascia. BMW introduced a slightly refreshed front bumper with more aggressive styling. Its massive grille featured a surrounding edge that channeled the air inside the dam for a better cooling effect. The refreshed version received new LED headlights as standard. From its sides, the carmaker introduced a new set of light-alloy wheels with a seven-spoke design.

Inside, the M6 featured a new steering wheel with paddle shifters for the dual-clutch gearbox. Also, on the center console, the carmaker placed the specific M gear-selector. As an additional reminder, the instrument panel sported the M-badge on the black dial background. The Merino leather-clad interior and the sport bucket seats matched the car’s exclusive look. Like its predecessor, the 2014 M6 convertible featured a power-operated roof, which could have been retracted or installed at speeds up to 25 mph.

Unlike its coupe sibling, the M6 convertible didn’t receive the Competition package. Its owners had only one engine choice, which provided 560 hp, 40 less than the most potent M6 Coupe. 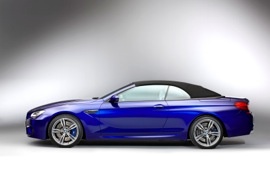 The second generation of BMW’s M6 Cabrio was launched in 2012.
Unlike its predecessor that offered a screaming naturally aspirated V10 engine, the 2012 version featured a twin-turbo V8.

The world of open-top performance cars could not be complete without a representative from the BMW. With tons of power and luxurious interior, the M6 was a good mix between a high-performance sports car and a roadster.

Unlike the rest of the 6-Series, the M6 offered a meaner look. The chrome-rounded kidney-grille, the side M-badges on the front fenders, and the four exhausts in the back were part of the package. The 20” light-alloy wheels were also fitted as standard. The enlarged fenders added some aggressive stance to the car. The headlights were offered as an option with LED.

Inside, the bolstered seats installed in the front helped the driver and the side passenger to keep their position while hard cornering. With the standard leather upholstery, the cabin looked luxurious. There were two seats in the back but without too much legroom. A rear windscreen was available to enhance the comfort of the front passengers, but it was installed over the rear seats.

The magic of the M6 came from a newly developed V8 engine with two turbochargers installed between the cylinder banks, to reduce the turbo-lag. The gasoline direct injection system also helped for better performance. The differential was controlled by a computer and a multi-plate clutch system, that allowed a locking between 0 and 100 %. 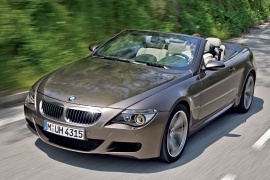 For years and years, BMW fans asked the German car maker to bring back the 6 Series, whose production was stopped in 1989.
In 2003 it returned and, in 2005 it was unleashed with a mighty V10 engine in the form of the M6.

The first generation of the 6 Series didn’t have an M6. It had an M635 CSI, which was almost the same thing. But the first, true, M6 was introduced at the 2005 Geneva Motor Show. It was more than an upgraded version of a 6 Series. It was almost a completely different car. One year later, the M6 was offered as a convertible as well.

The E64 M6 convertible was the first of its kind in the BMW lineup. A soft-top Granturismo vehicle that could roll nice and quiet despite its big engine, or fast and loud with the throttle planted. The triple-layer soft-top ensured a rigid-top like ride experience, with thick insulation. With the roof up, the car featured almost the same silhouette as the coupe version.

Inside, the M6 was available in a 2+2 configuration. The front bucket-seats featured high bolstering to keep the occupants in place while hard cornering. The leather upholstery was carefully crafted to enhance the luxury. The M6 was supposed to be more of a GT than a sports car, but it managed to be more on the performance side.

The technology inside was at the top level. It started with a naturally aspirated 5.0-liter V10 engine mated to a 7-speed SMG (single-clutch automated gearbox) fitted as standard in Europe. A 6-speed manual was available in the U.S. The suspension was stiffened to cope with the high-performance engine.